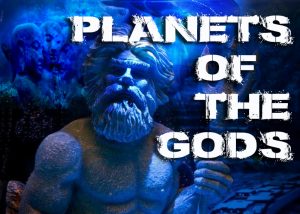 A 6 episode series exploring the mythical gods and what may be the kernel of truth, revealing them to be an advanced race rather than fictional characters representing irrational beliefs. From the earliest of times references are backed up by objects, metals and events faithfully recorded by the peoples of the time about these gods and goddesses, perhaps these myths are more appropriately legends.

Global history is littered with mystery and quite frankly, things that are just out of place, all our technology has shown is that it really shouldn’t be there if our understanding of mankind’s development is reasonably correct. It is a fascinating area of human evolution, what influences were in play and how does this affect us all today?

One of my favourite bible stories retells Ezekiel’s visions, he was a true visionary insofar as his recording of his beautiful experiences would have confounded people in his day, while in a modern and knowledgable world we are confounded by our own minds refusing to believe that his visions may not only be 2000 years earlier, but may not even be about us. His chariot vision is the stuff of legend as he felt the need to ‘save’ us from ourselves his behaviours became more bizarre over time. I can almost feel his frustration in seeking out a means to make his fellow men listen, while trying to explain, ‘well no, this is inside my head, but I know it is real.’ Even more I can imagine the mind bending idea that he himself could not entertain, that his visions pertain to a time and peoples that have no bearing on the time in which he lived or the humans he understood so well. He described a flying vehicle which we still couldn’t recreate today, although we have created parts that reflect what he saw but don’t yet have the tech to create it in entirety, it is intriguing at the very least.

Were our ancestors visited by aliens? Did mankind benefit from the offerings of superior technology? Join me on Mondays at 8pm EST and lets find out.